Campaign Tip: Never say or write anything you don’t want on Buzzfeed. 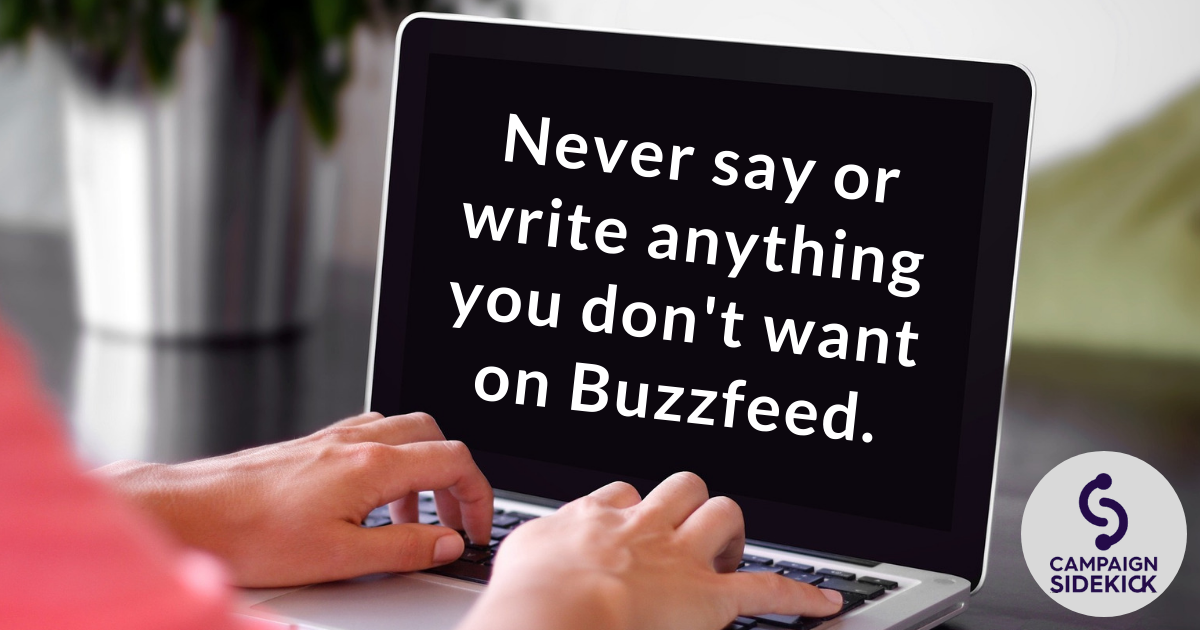 Here’s today’s tip: Never say or write anything you don’t want on Buzzfeed.

It’s incredible how social media and the internet have changed campaigns! While there are plenty of negatives associated with these evolutions, one of the things I like is that it makes it much easier to catch candidates in lies. Inconsistencies get caught much easier than ever before due to the amount of information that people are putting into the public domain.

Even outside of campaigns, we see corporate HR departments reviewing applicants’ social media presence for liabilities. A quick google search will reveal plenty of examples of candidates, their families or staff saying things on social media, even private messages or texts, that hurt the campaign when they came out.

This isn’t just an issue for what you say DURING the campaign. For instance, I’ve been on Facebook since 2004 and on Twitter since 2009. During that time, I’ve posted tens of thousands of status updates. I think I’ve done a reasonably good job to stay aware that those are always out there but I have no doubt that many of them would be used to attack me if I ran for office.

The written or recorded communication that we engage in (whether public or private) are part of our permanent record and there’s no telling when something may circle back around. During a few recent elections, written statements and even handwritten letters from decades ago have become part of the ammunition to undermine campaigns. So social media is just part of the story.

My point isn’t to have you always looking over your shoulder or sending every tweet to a PR consultant before hitting publish. Just ask yourself whether it’s something you’d be okay with showing up on Buzzfeed. Ask, “would my mom be ashamed if she found out I wrote this?”

I think the “Mom test” is a pretty good one for life generally. Recognize that your communication matters and is out there, potentially forever. Realize that you’re operating on a different kind of stage than most people and be smart about what you say!