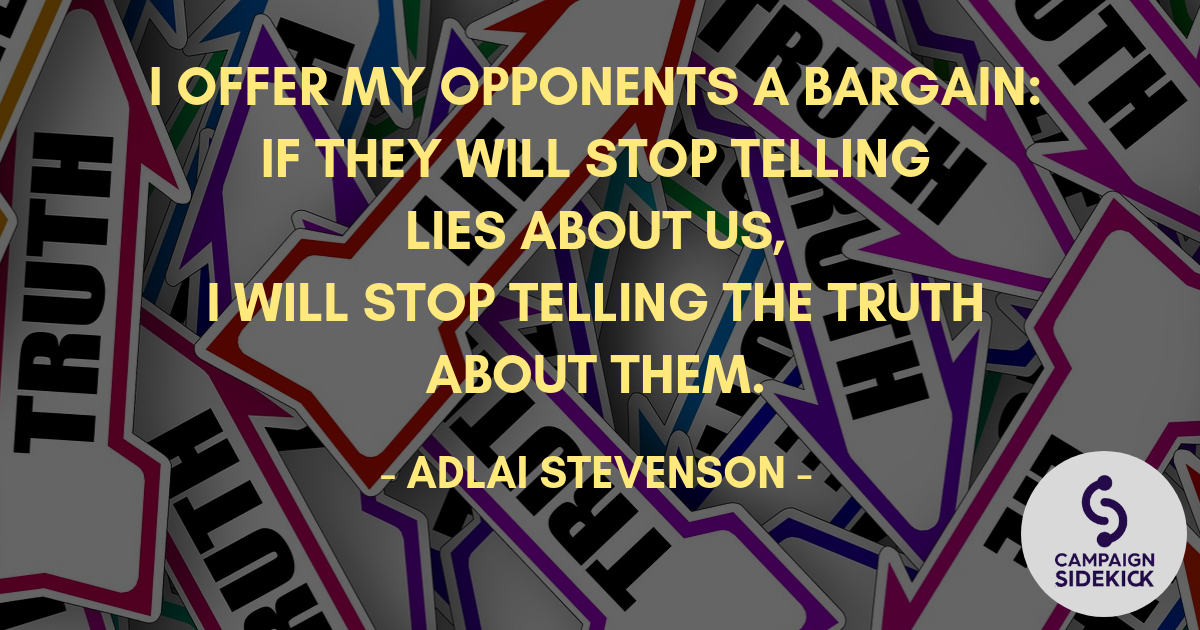 This tongue in cheek quote from Adlai Stevenson perfectly captures the feelings of many candidates. But it also brings into perspective a central question of campaign strategy: “How do we differentiate ourselves from our opponent?”

Most first-time candidates launch their campaign with the belief that they can win on their virtues alone. If only the voters could learn how awesome they are, victory would be assured. This is not far off the mark, since every campaign should start out by first establishing why THEY are the best candidate, rather than talking about why their opponent is the bad guy.

But there is a limit to the success of that strategy. If you spend the entire campaign solely focused on your positives and never, even obliquely show voters the down-side of electing your opponent then you’re not giving them full information. In that case, you shouldn’t be surprised when many fail to arrive at the point of supporting your candidacy. After all, if there’s no difference between you and your opponent, why should they care who they vote for?

The best course of action is generally to establish your positives and then draw contrast. Voters need to know what the difference is between you and your opponent. They’re asking themselves that question and will arrive at an answer whether you help them or not.

This doesn’t always need to be done through a direct attack though. Sometimes that’s the best path but, in my estimation, candidates default to its use too frequently. The better strategy might be to point out an opponent’s negatives by strategically choosing how you high light your virtues.

I liken this tactic to the use of negative space in art. By leaving something untouched, you’re able to draw attention to it. If your opponent has a history of bankruptcy, focus on your own fiscal responsibility. When running against an incumbent who never holds town-halls, make yourself easily accessible.

In none of these cases are we attacking our opponent. But by building up the value of our virtues in the eyes of voters, they will naturally look to the negative space and wonder how the other candidate stacks up against these attributes for which they have a growing respect.

Again, we’re not forgoing a direct attack because it’s always a bad idea. Rather, we’re looking for the most effective way of moving voters in our direction. We’re allowing them the opportunity to think through their decision with a more complete picture of the facts while avoiding a hard push that might lead to negative blow-back.